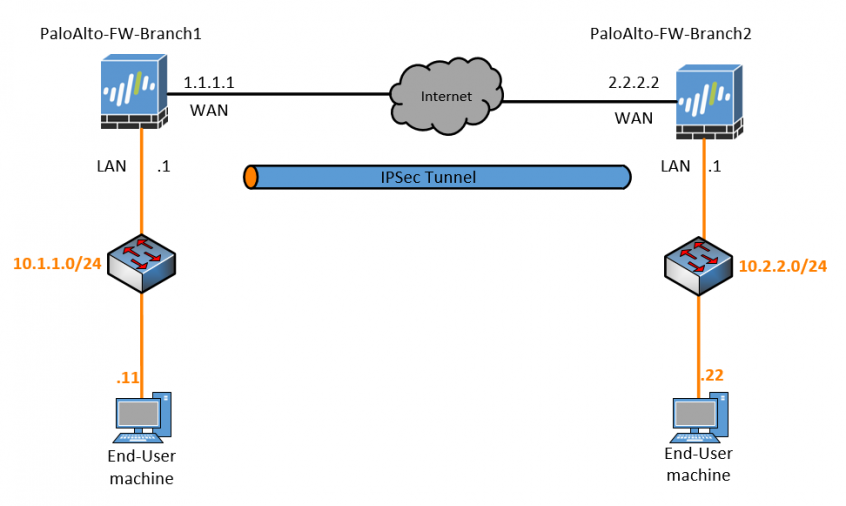 The great thing about the Paloalto firewall is that you can spin up its VM appliance in any of the hypervisors and it supports most of the features for you to get started, there are some features may not work well with unlicensed version. Still, for the lab purpose, you should be good to go.

In the last blog, I covered how you can set up IPsec tunnels between the opensource firewall Pfsense, which works well for small enterprises. However Paloalto firewall is the next-gen commercial firewall, and if you are planning to work with Paloalto firewall, you should know how to set up an IPsec VPN with it.

What are the objectives of this lab?

Below is the lab topology that we will configure and I am building this topology in GNS3.

Note: If you are new here, and do not know how to configure Palo Alto firewall in GNS3, you may check out the below articles.

Before you configure an IPsec tunnel, the first step is to ensure that you can reach the remote end, from each direction. By default, Paloalto firewall would block anything coming from the outside. Let’s configure interface management profile that would allow ping and then apply it to the interface.

Again this step is not mandatory though if you are concerned about allowing ICMP on the outside interface. It would be best if you made sure end to end communication is reachable.

You may read the article here, where I have covered how you can allow ping for the outside interface.

As you can see, I can ping the outside interface of both the firewalls.

Alright, we just made sure that we can reach the remote ends from both the firewalls outside IP. Let’s go ahead and start configuring the IPsec tunnels. In Paloalto it doesn’t support transport mode; it only supports tunnel mode.

Like any IPsec configuration, it starts with IPsec phase1 and then phase2.

Below are the parameters that we are going to use on both the firewalls for IKE Crypto.

Note: Except names, all the other parameters should match on both the firewalls, else the Tunnel will not form.

We just completed the IKE Crypto configuration on both the firewall, now let’s go to the next step on the phase 2 configuration, IKE Gateways.

The same Network profile window clicks on IKE Gateways and clicks on Add.

When you click on Add, there will be multiple options to fill in, first you have to fill in the IKE Gateway General and then Advanced Options.

Below are the IKE gateway parameters that we are going to use.

Name: Branch1-Branch2-GW
Version: You can have IKEv1 only mode, or IKEv2 mode or IKEv2 preferred mode.
I am choosing the IKEv2 prefered mode.

Address Type: Since we are not using IPv6, let me select IPv4.
Interface: Choose the outside interface, which is ethernet1/1 in our setup.
Local IP address: From the drop-down list, select the firewall 1 IP address. That is 1.1.1.1/24.

Peer Address: 2.2.2.2 (Firewall2 outside IP.)
Authentication: You can have two way of authentication in IPsec, one using a preshared Key, other is by Certificate. I am going to use the Pre-shared Key, and the Key is Paloalto.

Local Identification: Choose IP address and type the local outside IP address of the firewall one.

You just completed the General options in the IKE gateway, and it looks like below. Next let’s go ahead and configure the Advanced Options tab under IKE Gateway.

In the Advanced Options, you can see two tabs. Each represents IKEv1 and IKEv2.

On both IKEv1 and v2, select the Crypto profile that we defined earlier.

Once the Crypto profile has selected, you may click on OK.

Note: If you are using the firewall behind NAT, then you can check the option enable NAT traversal, that is not required here as we are simulating the internet and using the Public IP on the Paloalto firewall.

We now configured the IKE Gateway on the Paloalto Firewall 1, let’s go ahead and do the same steps on the Firewall2.

Add the IKEv1 and V2 profile that you have created earlier.

We have now completed the phase1 configuration of the IPsec tunnel in both the Palo Alto firewalls. Let’s go ahead and configure the Phase2, which include the IPsec Crypto and the Tunnel creation.

The first step in the Phase2 configuration is the creation of IPsec crypto.

Below are the parameters that we will use for the IPsec Crypto for both the Branch1 and 2.

Note: Make sure that except the name, all the other parameters should match. Otherwise, the Tunnel won’t come up.

Below is how the IPsec Crypto configuration looks like on the Paloalto firewall 1.

Before you create a tunnel interface, it is recommended that you add those tunnels to a specific zone.

So let’s go ahead and create IPsec zone on both the firewalls.

Click on Network, Zones and as you can see, I have two zones that I have created already Trusted and Untrusted.

Just give the name, IP-Sec, type Layer3 and click on OK.

Click on the Add button to create a new Tunnel.

In the virtual Router, you can add your virtual Router and the zone which we have created. Follow the same steps on the firewall two as well.

Name the Tunnel, for example, on the firewall one Tunnel-to-Branch2.

Tunnel Interface: Select the tunnel interface that we have created before.

Choose the IKE Gateway and the IPsec Crypto profile that we have created earlier and click on OK.

Note: You don’t have to add any proxy IDs as this is not policy-based Tunnel, it is a route based tunnel. Follow the same steps on the firewall 2.

As you can see the tunnel status is now shown as down.

The tunnel creation is complete, but do you think the remote end LAN side should be able to talk now?

Then the answer is NO!, because we have not configured the rules and routes for that.

6. Configure the Static routes for the IPSec tunnel.

On the Static routes, define the static route on the first firewall that says “to reach 10.2.2.0/24 network goto the tunnel interface 10”

Similarly on the Branch2 firewall, define the static routes “To reach the Network 10.1.1.0/24 goto the tunnel interface 10”

Next hop should be none.

The IPsec tunnel creation is now complete, but the Tunnel will not be active until any traffic is initiated. And for the initiated traffic from the Branch 1 LAN side to reach the Branch2 LAN side, we need to define a policy. Otherwise, it will be blocked by the firewall.

Note: This policy configuration is the same for both Branch1 and two firewalls.

Under General give it a name: Allow-IPsec.

In the Action tab, make sure that you are Allowing the traffic, also check the boxes for the logs.

Once completed, you should be able to see policies on both firewalls like below.

We just completed the IPSec configuration. Lets quickly check the tunnel status, as you can see, it is down at the moment.

To bring the Tunnel up, either of the LAN side has to initiate the traffic, let me goto Branch2 and start sending traffic towards Branch1.

Let me check the tunnel status.

Let’s also verify the HTTP access between the sites.

I already enabled HTTP access on both the end hosts, to check the HTTP port is opened or not both sides, I can type the command telnet 10.1.1.11 80 from the Branch2 Router.