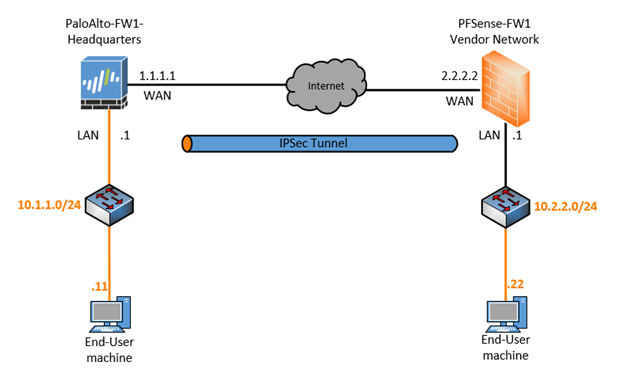 In a world where everything connected over the internet, it is quite common that we get to see many enterprise users connect the branch offices via the IPsec VPN.  Moreover, the internet connection is getting cheaper and cheaper now as compared to the dedicated links. That is one of the reasons too the SD-WAN is becoming popular as well.

Connecting the branch offices over IPsec using the same equipment is easy, which we tried last time, Site to site IPsec Tunnel between Palo alto firewalls and also between PFsense firewalls.

But what if you get a request to configure IPsec on a multi-vendor environment, where each IPsec endpoints are different? Let’s look at that in this blog.

It is very common on an enterprise network you get a request to connect a 3rd Party vendor network using the IPsec VPN. Most of the time, the vendor might be using different hardware’s. So it is essential to know how you can connect another branch network over IPsec where the remote branches are using other network devices.

In this blog, we are going to build an IPsec Tunnel between Palo alto firewall that is sitting at the Headquarters, and Pfsense firewall is at Vendor network.

Please check out the previous article here, If you wanted to learn more about how I have set up the internet router as well as the end-host machine.

If you don’t have GNS3 setup, make sure you set up the topology as above.

Prerequisite before you proceed.

On the Paloalto firewall, I have already configured the below.

The objective of the lab.

How to configure IPsec between Paloatlo and Pfsense?

Since this is a lab we have to configure both the sides. 😊

1.Configure the Paloalto firewall for IPsec.

We will start the lab by configuring the Phase1 and then will go ahead and configure the Phase2.

In Paloalto Phase 1 configuration will start with IKE Crypto and the Gateway, Lets start with the IKE Crypto.

Below are the parameters that we are going to use.

Next let’s go ahead and configure the IKE Gateway.

Below are the parameters that we are going to use.

Note: Make a note of the Pre-shared key as we have to define the same on the PFsense remote end.

Local and Peer Identification: Add the respective IP addresses, this field is not mandatory though.

In the Advanced options, select the IKE crypto profile that we have created.

Similarly, click on the IKEv2 tab and choose the crypto profile here as well and click on OK.

You need to create the tunnel interface and add to the IPsec zone, that we have made in the beginning.

Click on Add to create a new tunnel interface.

Add the tunnel interface to the default router and the IPsec security zone.

We have completed the prerequisite, now let’s go ahead and connect all the pieces and build an IPsec tunnel.

There nothing hard here; you need to name the tunnel and call each item that we have created.

You need to configure policies to allow IPsec communication.

On the Destination, fill in the same details.

On the action tab, make sure you are choosing the Action as Allow and log settings are enabled.

5. Configure the Static Route for the IPsec.

We just configured the policies, and for the headquarters to talk to the vendor network, you need to tell the Paloalto firewall to send the traffic via tunnel interface 20.

Add the Destination and the interface as the Tunnel interface 20 and click on OK.

We have now configured headquarter side of the firewall, let’s proceed with the Pfsense side.

Like we did for the Paloalto firewall, let’s go ahead and configure IPsec following the phase1 and Phase2 configuration.

Under Phase 1in general information, follow the below Parameters.

In Phase1 Proposal (Authentication), Add the same preshared key that we have defined on the Paloalto firewall, which is Paloalto-pfsense.

Note: Both sides should match.

On The Phase1 Proposal (Encryption Algorithm)

Choose the below parameters.

Leave the lifetime the default to 28800

Click on Save, you should be able to see the Phase1 is complete.

In the Phase2 General information, modify the following.

On Phase 2 proposal (SA/Key Exchange) configure the below.

Alright, we just configured the IPsec tunnel, let’s allow the remote traffic from the Headquarters to the vendor network.

Lets go ahead and check the IPsec Status on both the Palo alto and the Pfsense firewalls.Pfsense – Status— IPsec

Both the sides are not up yet.

The tunnel will only come up when there is traffic initiated towards it. Provided we have configured everything successfully.

So let me initiate a ping from the Vendor management network to the Headquarters.

As you can see, I lost some pings, but I got the response right after.

Let me also do the traceroute to understand what path it is taking.

And that also shows it is taking the IPsec tunnel.

Let’s check the Status from both the firewall ends.

As you can see, my IPsec tunnel is up, on both the Headquarters and vendor network side as well.