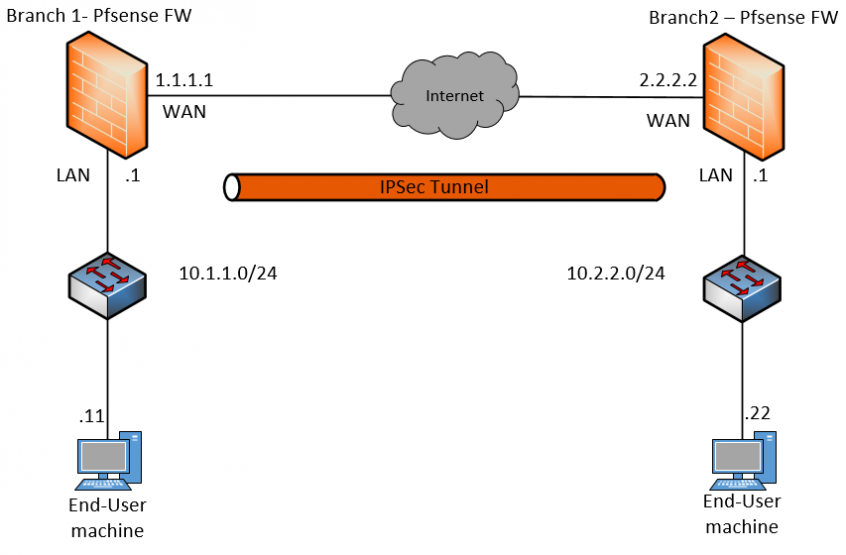 If you wanted to connect two sites over the internet, the very popular method is to use the IPsec. By default, the IP alone doesn’t provide security, so we need to wrap the IP packet with IPsec to encrypt the traffic inside the IP. Once the IPsec connection is established between two sites, no one on the internet can decrypt the packet.

Does IPsec in Pfsense work well in GNS3?

When I first heard about the Pfsense firewall, I asked the same question: Is it possible to set up IPsec tunnel on a free and open firewall in GNS3?

And the answer is Yes, you can build multiple IPsec Tunnel on a Pfsense firewall, and it works great just like any other firewall would. So if you are on a tighter budget and wanted to spin up a firewall in the network, Pfsense is the way to go.

I have set up Pfsense lab in gns3 in my previous blog. In this blog, let’s set up a site to site traffic between two sites using IPsec.

How have I built the Pfsense IPsec topology?

Before we build the IPsec tunnel, lets talk about the lab that we are going to configure the tunnel.

You can skip this part if you want to go right into the configuration below.
Below is the topology that we are going to use. If you are using GNS3 and do not know how you can setup Pfsense in GNS3, I highly recommend you start here and come back.

If you are not using GNS3, please set up the lab as per the above topology.

To simulate the internet, I will use a cisco router that can act as an internet router.

Here is the router configuration.

Connect the Pfsense firewall to the internet router.

Configure the PfSense LAN side.

Connect the local machine to the Pfsense LAN.

Once you configured the LAN side of the Pfsense, the easiest way you can access the web GUI is via your local machine.

Please check out step 6 in this articles to know how you can connect the Pfsense LAN side to your local machine.

We are going to use end-user machine to test the IPsec connectivity after it is deployed. We don’t need to have any big client operating system for this to test. You could use a tiny Linux mint host, Webterm or even Cisco Router.

For simplicity’s sake, I am going to use a cisco router as the end-user machine. So I dragged and dropped the Cisco router to the topology and followed the below.

Below is the actual configuration.

After you build the lab, you are off to go!.

Steps to configure the IPSec tunnel in Pfsense.

The primary check that you have to perform before you build any IPsec tunnel is to verify remote peers’ reachability. You can use Ping to verify the other side, unfortunately, the communication from the outside to the Firewall outside interface is disabled.

So you need to create a rule to allow only ICMP packets for the remote peers. This step is not necessary, though, but it would make our life a lot easier when you wanted to troubleshoot some issues in the future.

Note: While allowing anything from outside in the real network, make sure you allow only ICMP and nothing else. It is not recommended to expose any other protocol to the internet-facing IP.

In the console, press 7 and enter the public IP of the Branch1 Firewall.

How about my internet router IP 1.1.1.2? Will I be able to communicate?

And Yes, I can communicate with that IP, and it works just fine.

Instead of creating the rules manually, there is an easy way you can create Pfsense rules. It is called easy rules. When we initiated the Ping from branch2 to branch1, it should trigger logs for the same, and with the help of the logs we will create rules right within those logs, so let’s take a look.

The Ping was not working on the Branch1 Firewall outside IP.

You should be able to see that the ICMP packet is getting denied. To add Pfsense easy rule, click on the Plus icon.

It will help you create an easy rule Just for ICMP, click on Confirm.

You can now see the rule has been configured.

If you open the rule, you should see the echo request has been allowed under ICMP.

Let’s verify the Ping now. As you can see, we can reach the public IP of the Branch1.

Do the same steps for the other side as well.

As you can see, I allowed the ICMP echo request on the Branch2 side, and you now should be able to ping the Branch2 public IP from the Branch1.

After you verified the WAN side’s reachability over ICMP, let’s go ahead and configure the IPsec tunnel.

Below are the IPsec parameters that we are going to use.

We will go ahead with the above information and configure Phase 1 of the IPsec tunnel on Branch1 and Branch2 and then move on to phase2. We basically mirror the configuration on both sides except the peer IP and remote subnet information.

After we completed both the phases, the tunnel should come up just fine.

So let’s go ahead and set up phase 1 of the tunnel.

Let’s go ahead and add the phase 1 configuration by clicking Add p1.

It would open a phase 1 configuration wizard. Let’s look at each item.

Below is the field that you need to modify under the General information.

We are leaving the default value and just adding the Pre-shared Key.

I clicked on the button which created a Pre-shared Key for me, let me copy and keep the same PSK on both sides.

Branch 1 and 2 configurations are the same here.

Below is what we will configure for the Encryption Algorithm, and yes, both the Branch1 and 2 configurations are the same.

There is nothing much on the Advanced Options. You can click on Save here.

Note: In a real network scenario, if you have kept the Firewall behind the NAT, you should check the option NAT Traversal. Since we are not behind the NAT, I am not bothered about it.

We now have completed the Phase1 of the IPsec tunnels. Lets go ahead and configure Phase2 of the tunnel now.

On the same screen, VPN – IPsec, just below the Phase1 configuration you should see show Phase2 Entries, click on that.

The Phase2 configuration wizard now open. Below is the field that you need to modify.

Remote network – Here, you need to specify the remote network we are trying to reach over IPsec from Branch1. Add 10.2.2.0/24 here.

Both the Branch one and two configurations are the same.

You can add the remote Lan IP address here so that the Firewall should start initiating the tunnel. Reverse traffic is not checked in this case.

How to check IPsec tunnel status in pfSense?

If you have followed the above steps, the tunnel should get established just fine.

In the Pfsense firewall, you can click the Status button on the top and from the dropdown choose IPsec to see the tunnel status. As you can see, it is established.

The first raw represents Phase1 of the tunnel and the second raw show Phase2 and both are in an established state.

Though the tunnel is up, we cannot communicate to either side yet over ipsec, as we have not allowed the traffic via the rule.

As you can see, I am trying to reach the remote end host 10.2.2.22 from the branch1 localhost, but it is not reachable.

Just like how we allowed the WAN connectivity over ICMP using the easy rules, we will do the same steps here as well.

You should be able to see the Deny logs here for our ICMP packets.

Click on the Plus icon to add the Easy rule.

Click on Confirm. For now, this will create the auto rule.

As soon as I added this rule, I can communicate Branch2 from branch1, as you can see below.

Why am I unable to communicate via other protocols?

If you look into the Protocol under Easy rules, you should see it is allowed just ICMP on IPsec. We need to change that for other protocols to pass. Because in Site to Site IPsec traffic, the hosts should be able to communicate with remote hosts over a different variety of protocols than just ICMP, so we will have to fix that.

Also, did you notice we are allowing just a single host’s communication, not all the hosts in the subnet?

If we don’t modify that either, in the future, if you add any other hosts to the network, you shouldn’t be able to communicate with those hosts. So the simple way to fix is to modify the host address to subnet also allow any protocol.

Before enabling the port, let’s check if we can communicate via over http.

We already enabled the http server on the remote end when we configured the end hosts.

On the Branch1 localhost, let’s try to telnet into branch2 local hosts to see if we can communicate over port 80.

As you can see, it didn’t work.

As you can see above, the communication is blocked on port 80.

Let’s go ahead and fix this.

There is two way you can fix this.

You can click on the plus icon on the logs to create easy rules, or you can modify the existing ICMP rules to allow required ports.

Since adding the easy rule would create one more rule, let’s allow all the protocol to the branch1 and 2 subnets using the existing rule where we allowed ICMP.

And change the protocol to Any.

Change the source and destination IP to subnets and click on Save.

Let’s try to access the branch2 router over port 80. As you can see, it just worked fine.

But what about Branch2 to Branch1 connectivity? Will it work?

It doesn’t, as we have not configured any rules for the same, so it would just block by default.

Let’s fix this as well.

Step2. Click on Add rules.
Change the protocol to Any.

As you can, I am now able to ping from Branch2 to Branch 1 and can communicate over port 80.

Alright, we finally configured the IPsec tunnel, and both the LAN sides can talk to each other. And creating the IPsec tunnels on the Pfsense firewall is reasonably straightforward. You will get the hang of it after you build multiple tunnels.