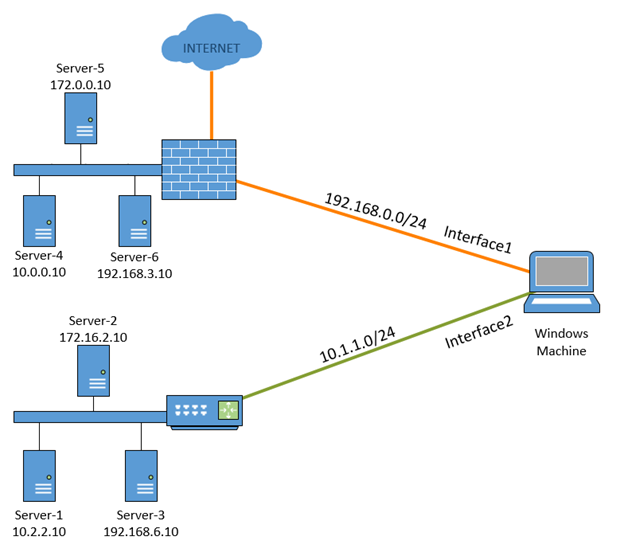 Have you ever connected to a VPN and realize that you cannot access some of the network resources that you have at home? Maybe you are not able to access Printer in your local network, or something else.

And other situation is you have a windows machine that is connected to two different networks and you Are not able to access some of the network resources and some of them are working fine.

Then you have a problem with your network routing, in this blog I am going to cover how you can solve those above issues by Reconfiguring the windows routing table.

If you are not familiar with routing then don’t worry, routing is a mechanism to connect two different network Segments to each other.

Suppose you have a network 192.168.1.0/24 and another 10.1.1.0/24. By default, both of those networks cannot talk to each other because both are two different subnets. For both the network to talk to each other, you need to use static routing.

There is something called dynamic routing, which is used by the network devices such as routers, firewall and layer3 switch and even some of the windows server machine.

In this blog, we are focusing on the end host level especially windows static routes.

What is static routing in windows?

A static route is a specific subnet route that is defined by the admins manually to reach a certain destination. You can specify the destination subnet that you want to reach from the host and point to a default gateway.  You can add as many static routes as you like.

The static route is usually not needed when you host has only a single interface, the default route will take care of that.

Read also,
How To Set Static IP On Ubuntu? (GUI and CLI)

What is default route in windows?

If you don’t know the subnet that you want to reach, that’s when you use something called default routes.  The default route is mainly configured to reach the internet.

We don’t know the IP addresses that are available on the internet, right?

That means you cannot specify the routes in the routing table, and on the internet, there are millions of IP addresses, and how do I reach those IP address from your local machine?

However, In some situations, it can create a problem, because you may have multiple LAN ports and all are configured with DHCP, as soon as the host receive the IP address via DHCP on all ports, it also add default gateways for all those interfaces. The result is multiple default routes towards multiple gateways. This would create a problem when the end hosts wanted to reach the internet.

how to view the routing table in windows?

Like any network devices, the windows machine also has a local routing table. It can tell you lot of information about the routes that this windows box is aware of.

To view the windows routing table, you can enter the command route print in windows command line prompt. However, that you would display both the IPv4 and IPv6 routing table, and you can also get the route output specific to the IP version.

how do I see ipv4 routes in windows?

If you wanted to see just the IPv4 routes in windows you can type the command route print -4.

how do I see ipv6 routes in windows?

Just like the IPv4 you can also see the IPv6 routes alone in the windows routing table by typing route print -6.

How do you read a Windows routing table?

How do I manage multiple gateway in windows?

Before we begin, lets validate the internet connectivity on this host.

Click on the start menu, and type CMD. Right-click and Run as administrator. Click yes on the admin prompt.

Note: To see the routing table, you don’t need to access the CMD with Admin rights, normal access would do.

Yes, I can reach the internet and let me check which path it is taking by using a command called tracert

If you look closely at the routing table, you can notice, there are two default routes with same metric. One towards 192.168.0.1 (interface 1)and the other towards 10.1.1.1 (Interface 2) with equal metric.

In this setup, for the first time when you try to access the internet, It will send the packet out to both the interfaces. And it elects the default gateway that it needs to use.

Since we don’t have access to internet via the interface 2 (10.1.1.1), we shouldn’t be using the default route towards it. To resolve multiple default gateways on your network, you got two options.

Change the metric for the windows interface or Delete the default gateway pointed to the interface 2.

To make the interface 1 as the priority one for the internet, you need to lower the metric of it.

All you have to do is, add the metric value of 1 for the interface 1., and that would change the windows metric value to 26 (25+1)

1.Get the interface ID.

When you enter the command route print -4, that will show you the interface list on the top.

As you can see, the metric changed to 26 for our main interface. From now on, all the internet traffic will go out via the interface 1.

To simulate the issue, I just unplugged the interface 1 and as you can see, I no longer have the default route towards the interface1.

How to delete the route in windows?

The above scenario will be useful, if you have internet access on both links where the interface 1 has more bandwidth than interface 2.

As we are going to delete the default route pointed to 10.1.1.1, you can use the command below.

We no longer have the default route pointed to 10.1.1.1 gateway.

How to add two default routes in windows?

In our previous scenario where everything was looking good, however when the internet on the interface 1 goes down there is no redundancy in place. So, you decided to add internet over secondary interface.

In the routing table, we already have a default route in which we set the metric to 26 previously.

To add the default route you can add the below commands.

The newly added route now has the metric of 75 now.

When you have connected to wifi and wired at the same time on your windows 10 PC, you will have two default route with different metric and if you are thinking about prioritising the wifi network over wired, then you check out the article here to know how.

How do I add a static route in Windows?

Alright the internet part has been taken care with default route, now lets talk about the specific static routes towards the server from 1 to 6.

In the servers list, to reach server 1-3 you must go via the interface 2 and the server 3-7 should reach via interface 1.

As you can see, we are not able to reach the IP, lets look into the IP table, and I don’t see any IP inside the routing table which is not good.

Currently what’s happening is that, since we do not have a specific route towards 10.2.2.0 it is taking the default route with lower metric on the interface1.

As you can see from the traceroute below.

In CMD add the route as below.

Ping the IP address, as you can see, we are able to reach the iP address via interface 2 now.

How do I add a persistent route in Windows?

We just added a static route in windows and it is working as expected, however what happens if you reboot the machine?

When you reboot the machine, whatever the changes that you made for the routing will be removed. For those routes that are temperoroly it should be fine, but not good for the permanent destination.

To avoid that you can use persistent route in windows. That way the changes that you make on the windows routing table are retained even after you reboot the machine. To add a persistent route, you just have to add -p at the end of the route statement.

From now on all the routes that we are going to add using the persistent command only.

You should be able to see the persistent route on the bottom of the routing table.

Lets add rest of the other IP addresses, before we add the routes, lets verify the reachability.

No, both destinations are not reachable now, so lets go ahead and add the routes.

The servers over the interface2 can be reached now, you may test the connectivity using the ping again and it should work just fine.

You can also verify the added routes in the windows routing table.

Can we reach the servers 4-6 in interface1 now? As you know we don’t have specific routes for it. If you said the answer is Yes, then you are right!.

As you can see, I am able to reach all three servers just fine, how come we are able to reach those servers even though we don’t have a specific static route for the same.

This is working great, right?

Yes but no, let me explain.

To add the rest of the servers subnet into the routing, you may add the route statement as below.