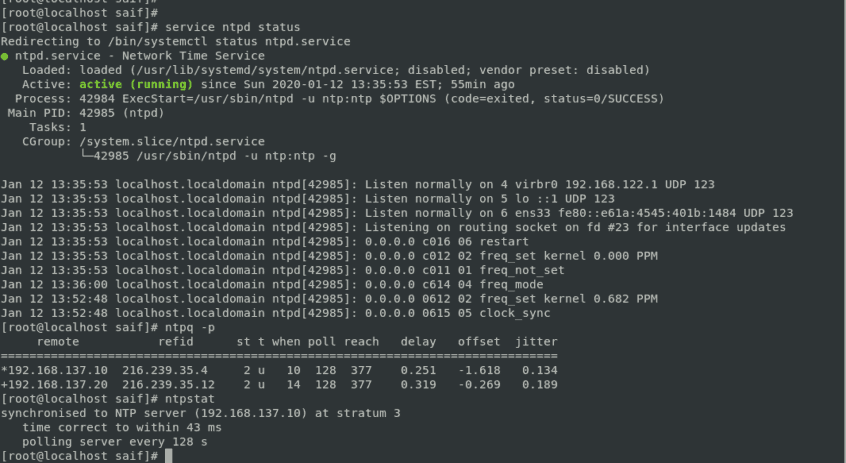 If you have a Linux machine (Ubuntu, Centos, Redhat) running in your environment and you would want to configure them as an NTP server it is pretty easy.

By default, most of the Linux boxes are pointing to some open NTP servers once it has the NTP utility installed. You can use the same one, however, we are going to use google time servers for this lab.

As the google time servers are used mainly in the google cloud, it is very stable and just like google public DNS servers the NTP also can be used by anyone on the internet.

What is iburst in NTP?

After the configuration, you can point all the clients to Centos as well as the Ubuntu as the NTP servers.

Please note that the steps followed in the Centos are the same for the Redhat server as well.

Prerequisite for this NTP configuration

You just need a Centos / Redhat / Ubuntu Linux distribution installed with internet access. Since we are going to be installing two NTP servers, you may need two operating systems.

The first step in the process is to install the NTP service installation in Linux. Most of the Linux distributions would not have NTP preinstalled by default. To install the NTP package and its dependencies on the Linux machine you can run the command below.

Once the NTP package installed you can go to the NTP config file and add the public NTP server.

The NTP configuration files are located at /etc/ntp.conf on Centos, Rhel, and Ubuntu. To edit the file enter the command below.

You could also use a nano editor if you are comfortable with it.

In this lab, I am using google NTP server. You could also go to pool.ntp.org and find out the NTP servers near to your location and use them as well.

As you can see by default the Linux NTP config will have centos public NTP server pool from pool.ntp.org preconfigured in CentOS machine.

so does on the Ubuntu NTP configuration.

change the values to our google NTP time servers below.

I have now removed the existing configuration and pointed both the Linux box to the google NTP server, let’s verify the same.

NTP configuration from the Ubuntu machine.

After you modify the file, you may go ahead and restart the NTP service just like how you would restart any other Linux services.

It is important that you add the NTP service to the Linux start up programs, so at any point if you had to reboot the machine the program would start automatically during the boot.

And add the NTP service to start during the system boot.

5. Allow NTP port on the firewall.

Finally, you will have to allow port 123 in the centos firewall service for the NTP service to talk to the outside world.

You can allow the NTP port by typing the below command.

After you finished the configuration, you may go ahead and check the NTP status on both the servers, as you can see both are synced with the google NTP servers.

It is common that NTP would take some time to sync with the remote servers, so just give it sometime.

If you still see the NTP status as not synced you may go ahead and restart the service one more time. Also, make sure you have internet access and able to reach the google time servers.

In ubuntu, you can also see some backup NTP server as well which I didn’t modify in ntp.conf

If I comment on the ubuntu backup server in /etc/ntp.conf file and restart the NTP server, you can see only google NTP servers are synced, similar to how we have seen for the Centos.

We got our NTP server configured on both CentOS and Ubuntu, now let’s put them to the test.

We are going to point one of the clients to our NTP servers. I am using Centos as the NTP client for this example.

To point the Linux NTP client to the NTP server, you can follow the steps below.

Similar to how we performed the NTP verification on the server, you can follow the same approach.

Type ntpstat to see if the NTP is synced.

You can see both servers are used, however, the primary server 192.168.137.10 is selected for the NTP synchronization as the ‘*’ suggests.

How to configure windows 10 as NTP client?

Well, configuring the Linux as the NTP client is not so common as many of the network client hosts are windows. So, it is better to sync the windows machine to the NTP server and see if it’s working.

So, I have a windows 10 machine in my lab and I am going to point the windows host to the linux NTP servers that we just setup.

To configure the windows 10 as the client you just have to follow only three steps.

Go to windows 10 control panel, change the view by category and click on Clock and regions. Click on set the time and date. And click on internet time.

You now will have to click on change settings.

Check the box that says Synchronize with an internet time server.

In the server field provide our primary and secondary server Ip addresses and click on Update now.

After few seconds you should be able to see a message that says The clock was successfully synchronized.

We have successfully configured the 2 NTP servers and verified the NTP service by connecting the NTP clients as well.