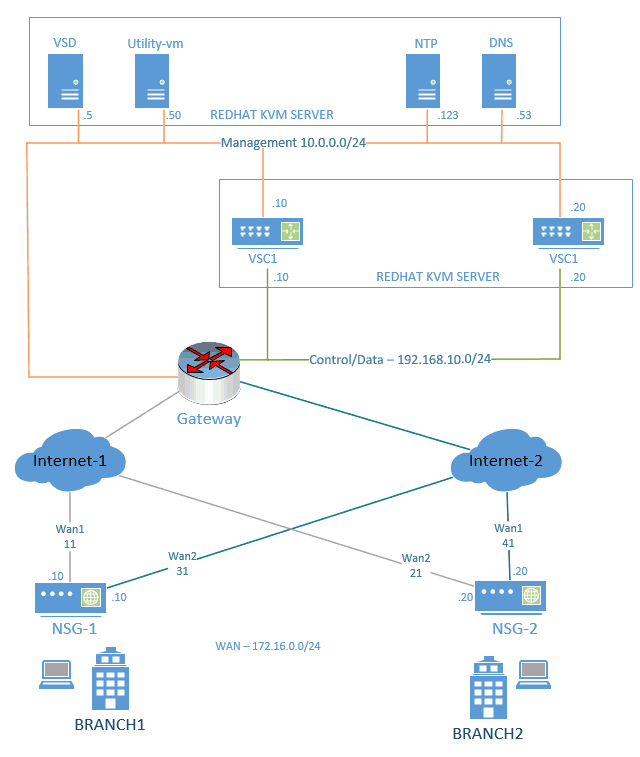 What is the underlay and Overlay network?

The underlay network is nothing but our traditional network which would help us to connect all the network equipment. Once the underlay is up and it’s reachable from point A to Point B then we can create a Network on top of it which is known as the Overlay network.

The Overlay network is not something new, VPN is an example of an Overlay network. On VPN you can use internet routable public IP space to connect the network, once the connection establishes the private IP can be exchanged on top of the public network that’s called the Overlay network.

In this lab, we are going to create an underlay network with which the Nuage SD-WAN can function.
At last, we will create the Overlay network on top it using VXLAN tunnels.

Let’s look at the topology that we are going to work for this lab.

As you can see, there are multiple devices connected with multiple underlay networks such as

All the devices we would be installed as a VM on a KVM server and the server intern connected to the Layer 3 switch for routing traffic between the devices.

2. How do we represent the Underlay Network for Nuage SD-WAN?

In our lab setup, we are connecting the Server directly to the Switch, and we can represent the Underlay network for Nuage SD-WAN by creating multiple VLANs on the switch and do inter-VLAN routing.

You also need to create the sub interfaces that represent the same VLAN on the server and then bridge interfaces for the VM’s to connect to the host underlay network in Linux KVM.

Make sure the link between the switch and the server is a Trunk and the below VLANs are permitted.

List of VLANs that we are going to use.
The default gateway is the Layer3 VLAN IP known as SVI.

Note : In real world scenarios the WAN IP would be a public IP not private.

First, we can create the layer 3 VLAN one by one on the switch. Once we finished the VLAN creation on the switch, we can go ahead and create the underlay network on the server using sub-interfaces, and then bridge interfaces.

Below are the Linux Server subinterfaces and its bridge name.

Note: usually, bridge interface name starts with br1, br2.etc, but for this lab we are using the name that represents its functions, which would provide more clarity.

3. Creation of VLAN’s on the switch

Here I am using HPE comware switch as the inter VLAN routing and gateway for the VM if you have a different vendor such as cisco, juniper then the config would be identical except for the differences in the commands.

Step.1 Create the VLAN that we are going to use.

Step3. Now you can go ahead and create the rest of the Layer 3 VLAN interfaces on the switch, after the VLAN creation, It would look like below.

We now need to create VLAN’s on the Linux Server (Redhat/Centos) to communicate to the VLANs on the switch.

Step2. To create sub interface that represents the vlan follow the below steps.

Step3. Create the sub-interface for other VLAN’s as well.
The easy way you can do this insteady of copying and pasting the config file is by using the copy command on linux.

For example, to create the sub interface 6

That was easy, wasn’t it ?, now you may continue came steps for the other sub interfaces as well.

5. Creation of Bridge interfaces on the Linux Server.

We have configured the subinterfaces on the server. Now you need to create bridge interfaces that would connect directly to the VM’s under the hypervisor

Step1. Verify the current bridge configuration on the server by typing brclt show

As you can see we don’t have any bridge interfaces configured, let’s go ahead and do that now.

Step 2. Creation of the bridge interface in linux.
In the terminal, create an interface configuration file called ifcfg-mgmt5 by typing the below for the management VLAN 5.

Step3. Create rest of the bridge interfaces, you may use the copy commands to copy the config from one file to another and modify the values according to the respective interfaces.

Step4. Awesome! we are almost done.
You have now created the sub-interfaces, and the bridge interfaces now let’s go ahead and restart the network services on the Linux server by typing the below to take this effect.

Installation of Nuage SD-WAN underlay network is complete, next lets go ahead and install the VSD.