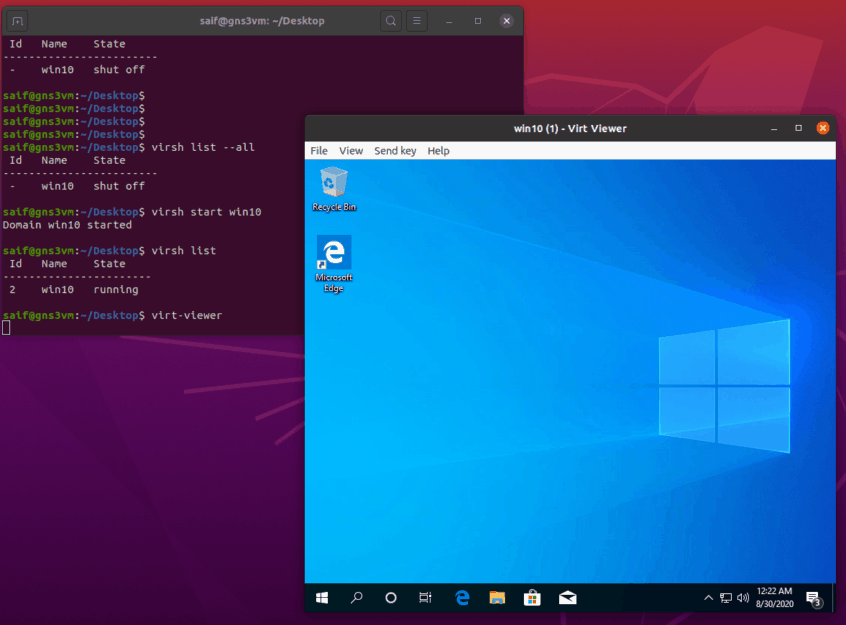 In the last few blogs, I covered how you can install different Operating systems in a KVM host. But some of you are wondering I got this guest OS installed but how do I manage it.

In this blog, let’s take a look at some of the useful KVM command line commands which you can run on the terminal.

The commands that is going to start is ‘virsh‘

This virsh command requires you to have root privileges, if you don’t have root access you will have to run the command using sudo, so it will be sudo virsh list, so please keep that in mind.

You may either type the whole command with virsh or you just type virsh then hit enter to start using the commands as shown below.

or you can type the whole command with the virsh at the beginning.

KVM XML file is where you update all the system virtual hardware resources that the KVM guest is going to use.

Once you have the XML created you can type the command below to create the VM.

If you would like to go back and check the VM hardware properties, you may enter virsh dumpxml <vmname>

This will display the read-only format of the XML file, and you cannot edit them.

For example, you wanted to increase the CPU of the VM, you may type virsh edit win10

Modify the line which start with vcpu placment, change the value to the required one, and save the file.

And when you start the VM you should have the VM with the new CPU configuration.

What if you wanted to see the VM domains which are not only running but also shut down, then you can type virsh list --all

4. How do I shutdown and start KVM VM’s?

To gracefully stop a VM you can type virsh shutdown <vmname>

If you try to gracefully shut down a VM in KVM, it would take some time, so I use the below command handy until the VM gets shutdown.

The above command would keep updating the terminal for every 2 seconds.

Force the KVM VM to shut

If you are in a hurry and you need to force the VM to shut, then you can use the command virsh destroy <vmname> .

Some people get worried when they see the word ‘destroy’, which means force stop in the KVM environment.

Is it okay to use virsh destroy command?

And you should use this command if you are not able to shut the VM at all using the virsh shutdown command.

To start the the KVM VM.

To start a VM you can type virsh start win10

How to reboot a KVM VM ?

If you would like to reboot the VM, then you just have to type virsh reboot <vmname>

5. how to connect to the KVM host.

For the creation of the VM in GUI, you must have used something called virt-manager. After you completed the installation you don’t have to go back to the virt-manager again.

You can type the command virt-viewer to access the guest VM, Provided you have VNC as the graphics added.

For example, below you can see I typed virt-viewer and it asked me to choose the virtual machine.

Since I have only one virtual machine, I can select the one that I have and click on Connect.

Note: If the VM is shut, you will not be able to access the VM using the virt viewer. So you have to use the virsh start command to start the VM and then use a virt-viewer to access it.

Connect the CLI based VM’s

The VNC based VM you can access by typing the virt-viewer, however, what if you wanted to access the VM which has only CLI?

The command to get into the VM is virsh console <vm>

So if you have Centos VM, with domain name centos, then the command would be virsh console centos

6. How to automatically start the KVM guest every time you reboot the host machine.

This is something useful if you are using the guest machine as your daily driver and you would like to use it all times.

So every time when you reboot the Ubuntu KVM host and you also wanted the VM to start at the boot you may enter the below command.

To disable the autostart of the VM, enter the command virsh autostart <vmname> --disable

7.How to delete the KVM VM

if you decide to delete the KVM guest VM, you may enter the command below.

To check the VM disk storage, you can type virsh domblklist win10.

The first Target device VDA is the virtual harddisk, and the second and third is the CDROM that I have attached on my virtula machine during the VM installation.

Let me remove the CDROM drive2 and check the status again.

First, I will shut down the VM using the command virsh destroy win10 and then I use virsh edit win10 to edit the VM, and in XML file under devices, you can see the above devices.

let me remove the third device which is the CDROM2 (SDC) and save the xml file.

You may now check the storage details, and you should be able to see only two devices at this time.

The first one is the virtual hardisk and the second one is the CDROM1.

One of the use cases for this command here is for expanding the KVM guest storage.

One important part whenever you wanted to create a VM is that, you need to know the host machines resources and you could plane accordinlgy.

So to get the information about your host, you can type virsh nodinfo

10. How to backup and restore KVM VM?

The best way to take a backup and restore of KVM VM is by taking snapshots and there are some virsh snapshot commands that I thought I would cover here, then I realized it would take a whole blog when you start explaining it, so no worries, I have also covered how to take snapshots, restore it and deleting with all the commands here.